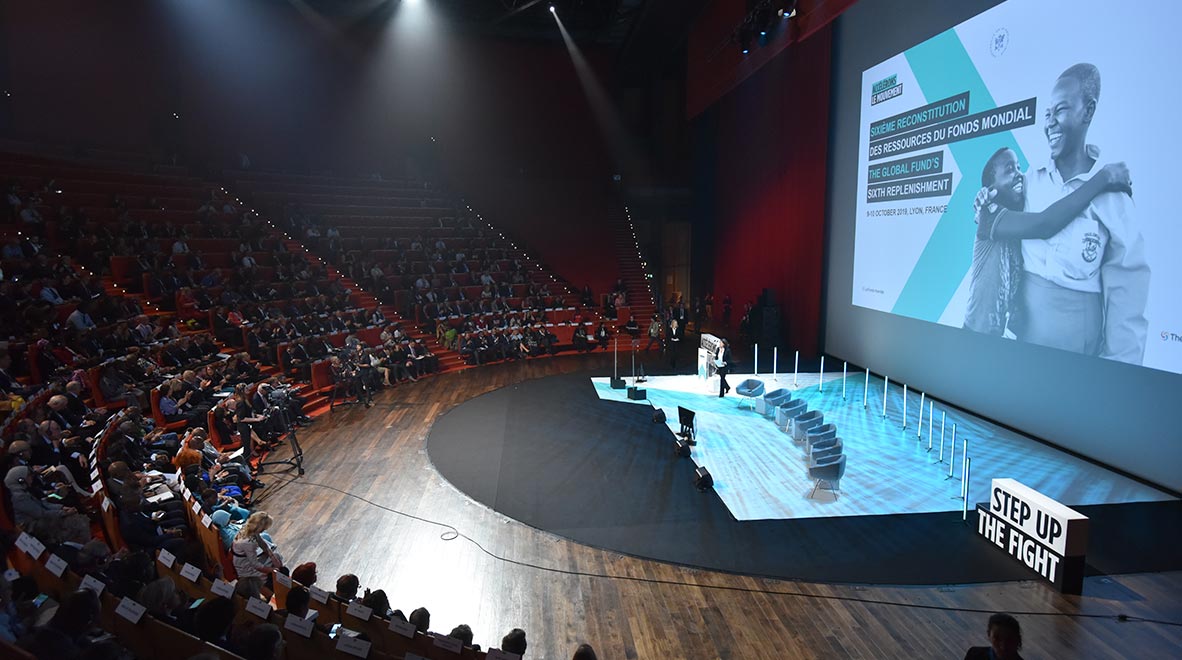 $14.02 billion pledged to the Global Fund, a private public partnership to defeat AIDS, TB and malaria and save more lives

11 October 2019, Lyon- The Global Fund to Fight AIDS, Tuberculosis and Malaria (the Global Fund), Thursday made history in the fight against the three diseases, with $14.02 billion pledged over the next three years. This is the largest amount ever committed to a multilateral global health financing mechanism to support lifesaving interventions and strengthen health systems. During the conference 23 African countries (up from 11 in the last replenishment cycle) committed over 75 million dollars to the Fund. This unprecedented number signals a significant increase in African pledges and demonstrates both the commitment of countries in Africa to the Global Fund as well as increased allocation of domestic resources to health.

“The people of Eswatini owe gratitude to the Global Fund for the great work it has done in the country. This is why we want to partake and make a contribution. The Kingdom of Eswatini would like to make a contribution of US$6 million to the Global Fund,” said His Majesty King Mswati III who is also the Chair of the African Leaders Malaria Alliance (ALMA) during the Replenishment Conference in Lyon, France.

Traditional funders that include key governments and donors increased their commitments by more than 15% compared to the last replenishment, re-affirming their commitment to the Fund’s life-saving impact and critical role in improving the lives of the millions of people living at risk of these preventable and treatable diseases.

“The increased and significant pledges to the Global Fund by African countries and the global community demonstrate shared responsibility, global solidarity and sustained political commitment to defeat the three diseases. The Global Fund is the biggest funder contributing to 65% in the malaria fight, saving millions of lives, we congratulate African governments for increased investments to save lives and achiever greater impact’ said Ms. Joy Phumaphi, ALMA Executive Secretary.

Despite international efforts to control and eliminate malaria for the past century, the disease continues to be a public health threat, particularly in sub-Saharan Africa. In 2017, there were an estimated 200 million malaria cases and 403 000 deaths across the region, of which 61% were children younger than 5 years. In order to ensure sustainability in service delivery to address health threats on the continent, African Governments and the private sector need to further increase domestic resources for health. ALMA will continue to support countries and the continental health architecture to keep malaria high on the agenda including support for the establishment of End Malaria Councils and Funds to increase advocacy, action, resource mobilisation and accountability.

The African Union’s long-term development plan, Agenda 2063: The Africa We Want, envisions an Africa free of malaria to create a solid foundation for Africa’s socio-economic transformation. To achieve this vision, the African Union codified its commitment to eliminate malaria in the Catalytic Framework to End AIDS, TB and Eliminate Malaria in Africa By 2030 and Africa Health Strategy 2016–2030.

Set to announce his vision for the fight against malaria on the continent Addis Ababa, 10 February 2020 – His Excellency President Uhuru Kenyatta, President of the Republic of Kenya, has assumed the Chair of the African Leaders Malaria Alliance (ALMA), a coalition of African Heads of State and Government advancing advocacy efforts, resource mobilization […]

Today, the United Republic of Tanzania announced the launch of its first national Zero Malaria Starts with Me campaign, becoming the 11th nation to join the ever-growing Pan-African movement. The campaign was launched during the Southern African Community (SADC) Malaria Day that was commemorated on the sidelines of the SADC Health Minister’s Meeting in Dar […]